Data shows more than 70% of the total staked Ethereum supply is contributed by staking services, with Lido accounting for the most amount.

Ethereum Staking Service Providers Have Locked In A Total Of 11.4 Million ETH

Last year, ETH successfully completed a transition to a Proof-of-Stake (PoS) consensus mechanism, which meant that miners no longer had a role to play on the network as chain validators called “stakers” filled in their role.

Just like miners, stakers earn rewards for acting as network nodes and handling transactions, but to become a staker, all an investor needs to do is lock in a collateral of 32 ETH into the Ethereum staking contract, and unlike what mining needs, the validator here doesn’t require any significant computing power to carry out the task.

But as the 32 ETH requirement is a bit too high for the average investor (at the current exchange rate, a 32 ETH stack would be worth around $52,400), some companies have started providing staking pool services, where holders can generally deposit any amount of tokens and earn staking rewards on them. These services usually work by pooling together the coins locked in by the different users, so that the combined amount exceeds at least 32 ETH.

As per data from the on-chain analytics firm Glassnode, the total value locked into the Ethereum staking contract is now around 16.1 Million ETH in the overall network (that is, including all platforms as well as investors with self-custodial wallets). This is about 13.4% of the total circulating supply of the cryptocurrency.

Here is a chart that shows how much of this ETH is coming from the different staking services in the market:

Lido is a decentralized liquid staking pool, which is a type of platform that adds the investors’ ETH to the staking pool and gives them another token in return that’s backed 1:1 with their original position. This token provides liquidity to the users on their locked ETH, meaning that they can sell it whenever they like, or make use of it in other services (like derivative positions).

Coinbase, Kraken, and Binance, the next three biggest providers in the sector, combined have locked in about 4.3 million ETH. Their individual dominances are 12.8% for Coinbase, 7.6% for Kraken, and 6.3% for Binance. Clearly, even their combined dominance at 26.6% is still lesser than Lido’s on its own. 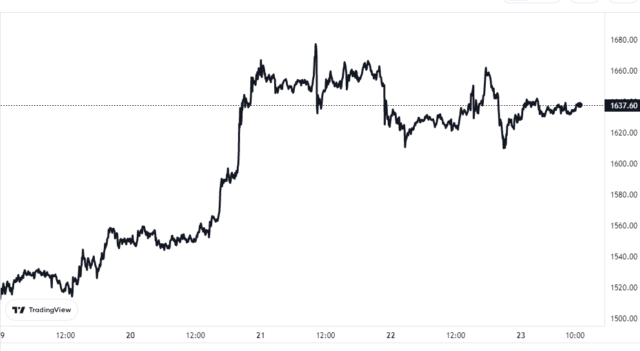