The Ethereum merge from Proof-of-Work (PoW) to Proof-of-Stake (PoS) is now roughly 30 days away after what feels like years of anticipation. While price action is the mainstay pillar of speculation, anticipation over ‘The Merge’ continues to grow – and so too does ETH’s market dominance.

New data shows that Ethereum continues to gain ground as the merge approaches; let’s review what the numbers reflect as we count the weeks down.

Speculation around the exact timing of the merge has been a long-time staple of conversations in crypto, but has been narrowed in recently after the adjustment to Ethereum’s terminal total difficulty, according to a tweet from one of crypto’s most notable names, Ethereum co-founder Vitalik Buterin:

This means the ethereum PoW network now has a (roughly) fixed number of hashes left to mine.https://t.co/3um744WkxZ predicts the merge will happen around Sep 15, though the exact date depends on hashrate. pic.twitter.com/9YnloTWSi1

This results in a static setting of hashes for the chain to mine, and results in a much more narrow perspective around when the merge can happen. The Bordel tool that Vitalik cites still estimates a merge on September 15 at time of publishing.

This anticipation has led to a strong growth in market share that is unprecedented over recent months, according to data from Arcane Research:

This has come primarily at the detriment of BTC, which has dipped in weekly percentage points – while ETH sees substantial growth. BTC has shown the weakest gains in August thus far, compared to large, mid and small cap indexes. According to Arcane Research, ETH’s market share today eclipses 20% – compared to roughly 14% just 60 days ago. 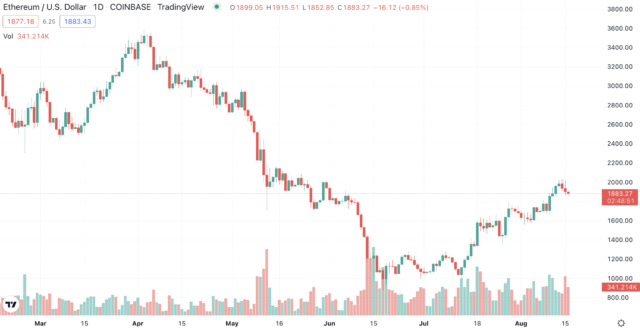 We’ve covered a variety of perspectives as we look towards the Proof-of-Stake merge, including a piece on why exchanges like Coinbase will briefly pause ETH transactions during the merge, as well as price action in spot markets vs. future markets lately.

As is often the case, speculation runs the gambit when it comes to what we could see out of ETH in the back half of the year following the merge. Proof-of-Stake has been touted as the long-anticipated, sustainable solution for Ethereum that can laud the blockchain as a now environmentally-friendly powerhouse that unlocks solutions for NFTs, DeFi, and more.

Furthermore, price impacts aside, the consensus switch has been the pillar of anticipated growth around the chain’s decentralization (with added accessibility, and thus more miners) as well as faster transactions per second (TPS).

Will the consensus adjustment shape out to be all that it’s been hyped to be? If so, expect ETH market share to continue to show aggressive growth.