After a tumultuous rollercoaster following the shocking demise of FTX, a period of notable serenity has descended upon cryptocurrency markets.

With 2022 being a complete and utter bloodbath, it almost feels suspicious that there is even a couple of weeks of low drama in the digital market space.

But the metrics show that the last few weeks have been among the quietest of the last couple of years. Given the fear of contagion that transpired out of FTX’s collapse, that is a good thing.

Having said that, there is plenty to be concerned about right now. As Coinbase CEO Brian Armstrong stated yesterday when he announced Coinbase was cutting an additional 20% of its workforce, there are likely “more shoes to drop” and there is “still a lot of market fear” out there.

Crypto lender Genesis last week laid off 30% of its workforce and is reportedly mulling bankruptcy. Crypto exchange Gemini, founded by the Winklevoss twins, has $900 million of customer assets stuck in limbo with Genesis, its sole lending partner for its Earn product.

The twins have demanded Barry Silbert, CEOP of Digital Currency Group (DCG), which owns Genesis, to step down, accusing him of defrauding Gemini Earn customers.

DCG fired back, calling it “another desperate and unconstructive publicity stunt from Cameron Winklevoss to deflect blame”. It also affirmed it was “preserving all legal remedies in response to these malicious, false, and defamatory attacks).

DCG is also the parent company of the Grayscale Bitcoin Trust, which has seen a massive discount to its net asset value, peaking at 50% in the aftermath of the FTX collapse as investors questioned whether reserves were safe (I wrote about GBTC yesterday).

For now, while all these episodes play out, the markets are standing firm. Action has been relatively muted, and in fact there has been a tangible return to normal levels for a lot of on-chain activity that went wacky over recent periods.

The below snapshot shows the net transfer volume in and out of exchanges. Since the start of the year, the action has been tepid, having spiked to extreme levels in November and December as first FTX collapsed and then the questions spiked about the health of Binance. 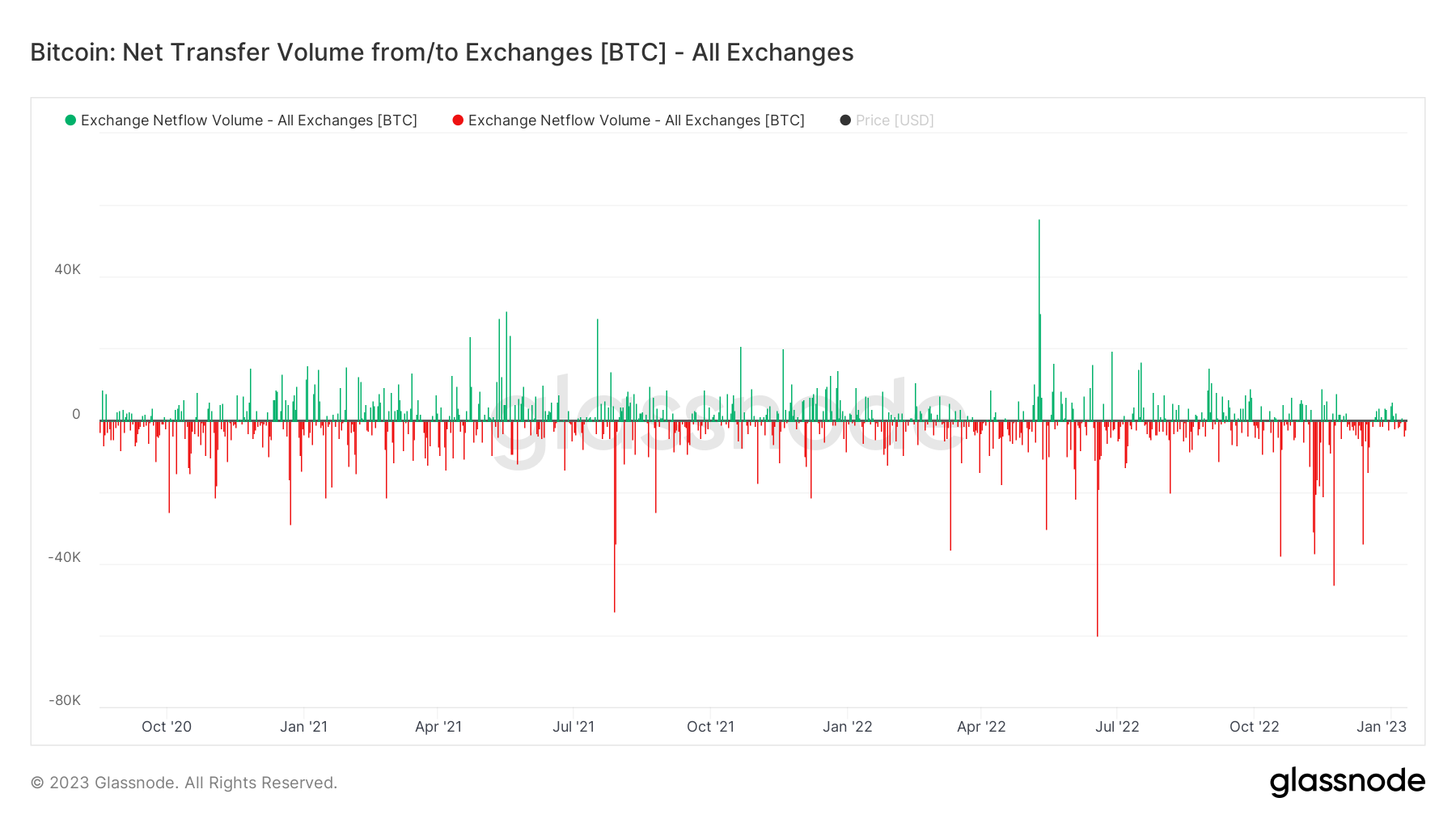 This notion that activity has returned to normal is reinforced when looking a the volatility of Bitcoin. The world’s biggest cryptocurrency has been trading sideways for a while now, and the 30-Day Pearson measure of volatility shows how there was a perceptible drop back down to pre-FTX levels in December.

It hasn’t just been a respite from within crypto circles. The broader macro environment is looking at least a bit brighter today than it did last month. Inflation is still rampant, but there have been two consecutive readings below expectation, and there is renewed hope that it may have peaked.

The most recent round of interest rate hikes kicked rates up 50 bps as opposed to 75 bps in the two prior months, and while Fed chair Jerome Powell and other central bank chiefs have affirmed that rates will continue to rise until inflation is conquered, the market has moved cautiously upward after European inflation came in at 9.2%, compared to 10.1% last month.

Next up is the US CPI reading on Thursday, which will – as always – be a vitally important day in markets. Expect volatility in crypto markets as coins stare at the number to try to assess what Jerome Powell may do with regard to interest rate policy.

After all, we know by now that crypto is very much holding the stock market’s hand – apart from when, you know, high-profile executives are revealed to be fraudulent (FTX), or top 10 coins cease to exist (LUNA).

Never a dull moment for long in crypto

Back in late October, Bitcoin was seemingly locked in crab motion around $20,000. With traders getting impatient, I warned how crypto could be one event away from a nasty downward wick. T

Three weeks later, FTX collapsed. I never imagined this would happen, and the timing was coincidental, but the premise of the piece reminds me of how I feel now. It’s amazing how short memories are in markets, but we have been here before.

Crypto won’t stay silent for long, and the asset class is far from out of the woods yet. The aforementioned ongoings around DCG, GBTC, Genesis and Gemini are just a few of the million things that could turn south at any moment.

There is also the story around Binance chief Changpeng Zhao being under investigation for money laundering offences by the SEC, there is Coinbase laying off 20% of its workforce following a 905 drawdown in its share price, and God knows what will come out of testimonies in the Sam Bankman-Fried court proceedings.

And then there is macro, where anything could happen to inflation, the Russian war in Ukraine or myriad other variables. It’s been a quiet couple of weeks but don’t worry – the madness will return soon.